What is cultural mediation?

An essential practice used in the cultural development of a territory, cultural mediation consists in developing a variety of strategies and tools to improve access to artistic production and encourage citizen participation and cultural expression.

In Vaudreuil-Dorion, the "Je suis..." project is nothing less than a new way of seeing culture and living it in the community.

Serie of six introductory cultural mediation videos produced by the City of Vaudreuil-Dorion as part of the cultural development agreement with the Ministère de la Culture et des Communications.

Laureate of several national and international prizes for her cultural mediation project Je Suis..., the City of Vaudreuil-Dorion is now recognized as one of the Cities of Agenda 21 for Culture by the worldwide network Cities and Governments United Local Government (UCLG) in addition to having won, in 2016, the prestigious International Prize - UCLG - Mexico City - Culture 21.

The Mozaïk parade, which takes place every June 23, is a collective creation by citizens, cultural organizations, community groups and businesses in collaboration with local artists. It brings together nearly 1,000 participants. In Vaudreuil-Dorion, the people's creativity is given free rein. Artists take the lead, helping citizens of all generations, nationalities, cultural origins and walks of life to create a parade entry that expresses who they are. The Mosaïk parade is a unique cultural mediation initiative that creates a space where artists and the public can work together in a tangible way. 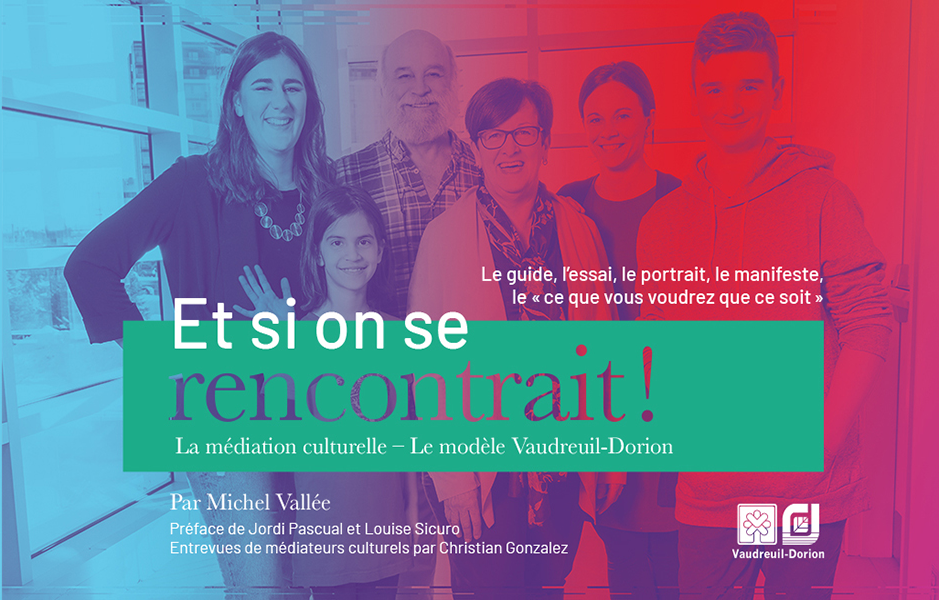 Written by Michel Vallée, director of the Recreation and Culture Department at the City of Vaudreuil-Dorion from 2009 to 2020, the book If we were to meet! Cultural mediation – The Vaudreuil-Dorion Model was officially launched in June 2019. You can consult the book, or get a hard copy, at the municipal library or obtain an electronic copy (in French, English or Spanish) by following this link.

For nearly 10 years, Vaudreuil-Dorion has been one of the cities that have given cultural mediation a chance to show its worth. This book is both a user manual and a portrait of a changing community that chose culture as a way of bringing its people together and envisioning a different kind of future. Michel Vallée, widely considered one of the pioneers of cultural mediation in Québec, has but one desire: to allow citizens everywhere to go out and meet their community and its culture.

Public art at the Centre multisports

During the 20 workshops, some 385 participants created a small work of art that is part of this gigantic permanent installation. The artists drew their inspiration from the expression "Pulling the blanket from its edge". They wanted to do the opposite, to create a huge quilt to emphasize the sense of welcome in the heart of the community, that everyone feels welcome under the same blanket. 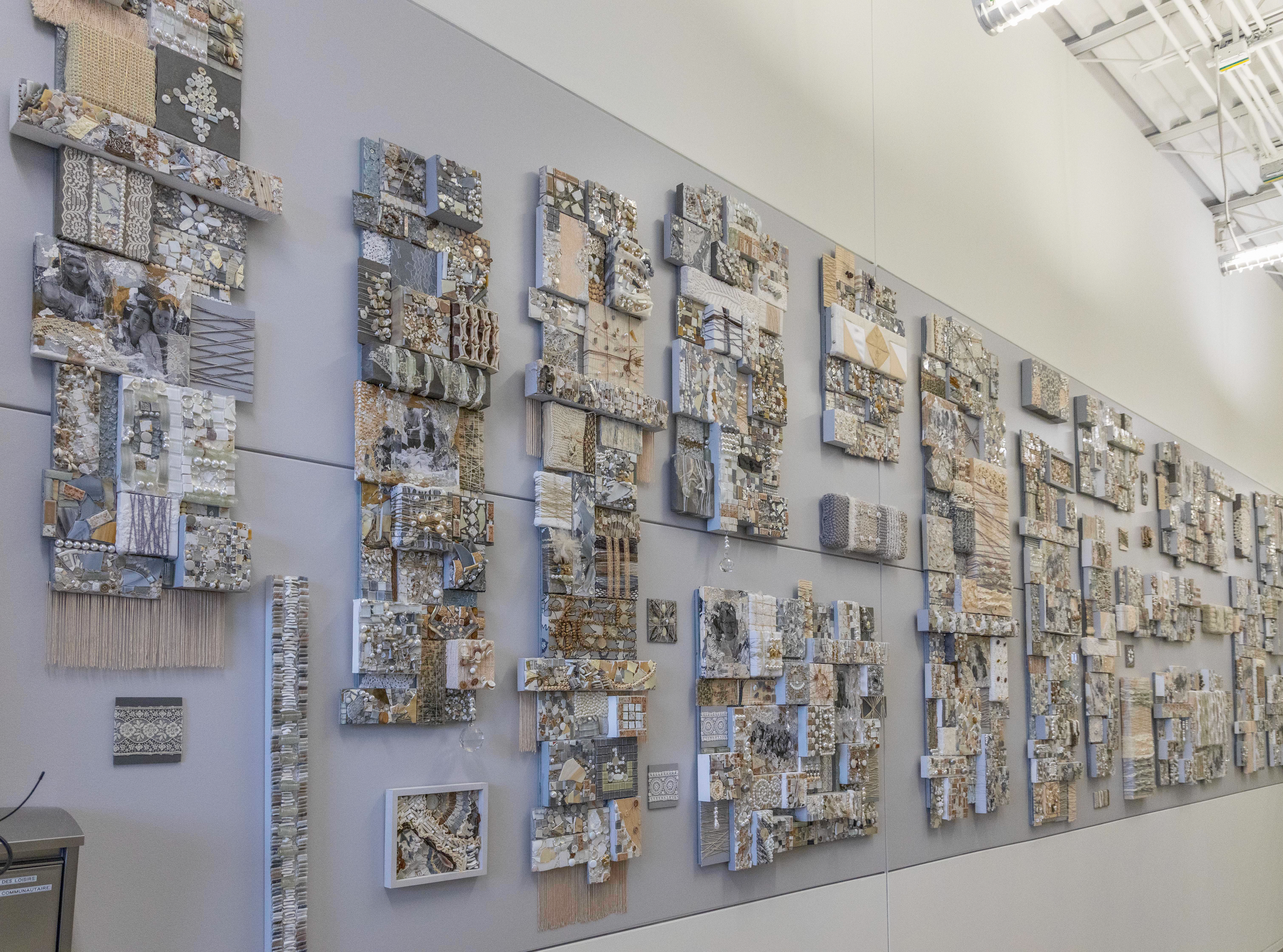 Public art on the building located at 200 Saint-Charles Avenue

Monica Brinkman, a mosaic artist, worked with about twenty young people from the Club ados d'Animation jeunesse on the work representing Yvette Brind'Amour. This great woman of the theater lived in Vaudreuil-Dorion for many years. The green background of the pop'art style work refers to the Théâtre du Rideau Vert which she founded in 1948. The black and white portrait was created by Monica, then the mural was created by graffiti artist Monk.e. 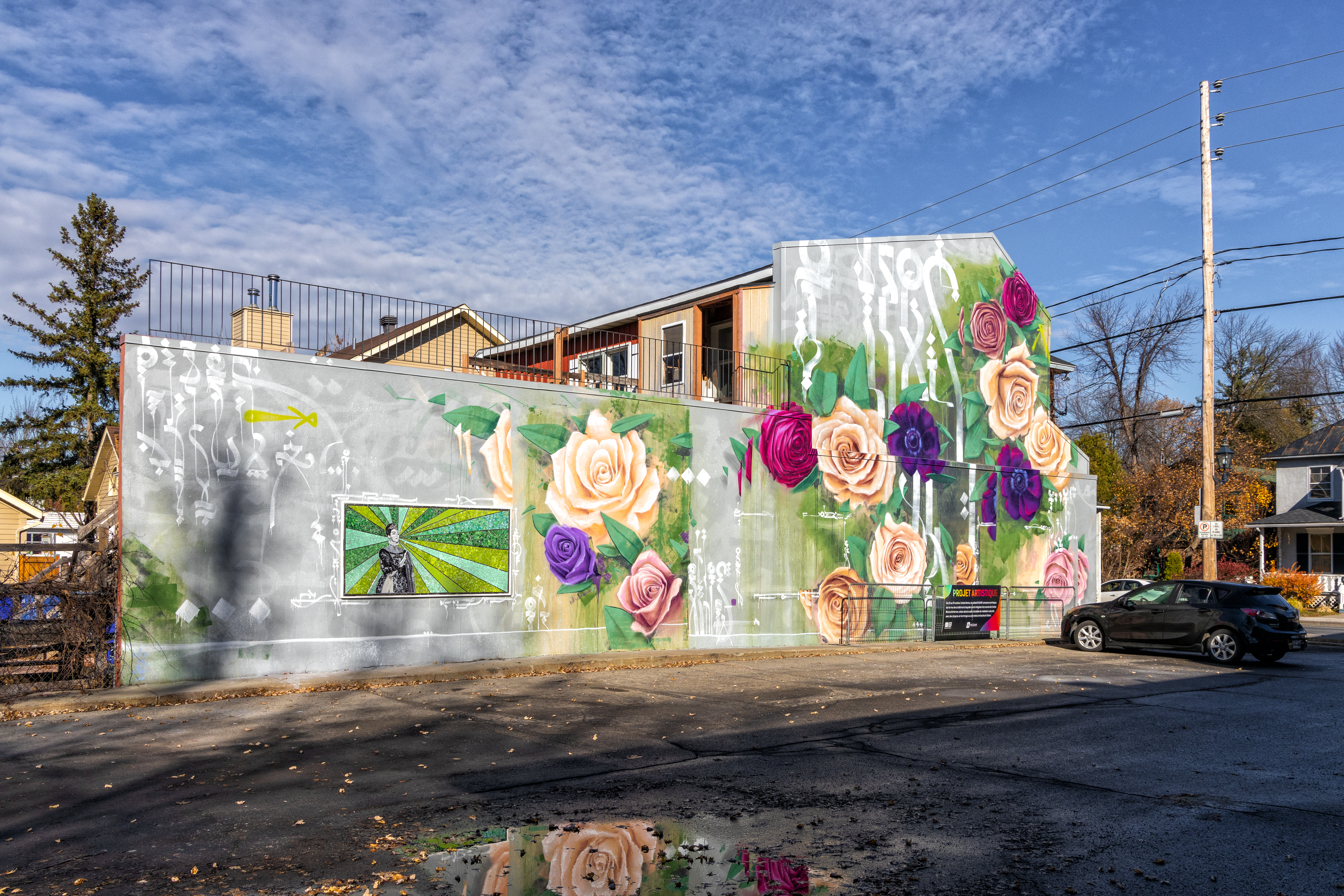 Public art at the Centre multisports

During the summer of 2019, at 405 Saint-Charles, several citizens participated in workshops to create epoxy flowers.
The Table de concertation des aînés de Vaudreuil-Soulanges, as part of the national seniors' day, proposed to its members to take part in the project with the component "The links of a city illuminate us". The objective of these workshops was to highlight the unifying role of seniors in the community. The garden will be on display throughout the summer, hoping to bring color to the lives of passersby. 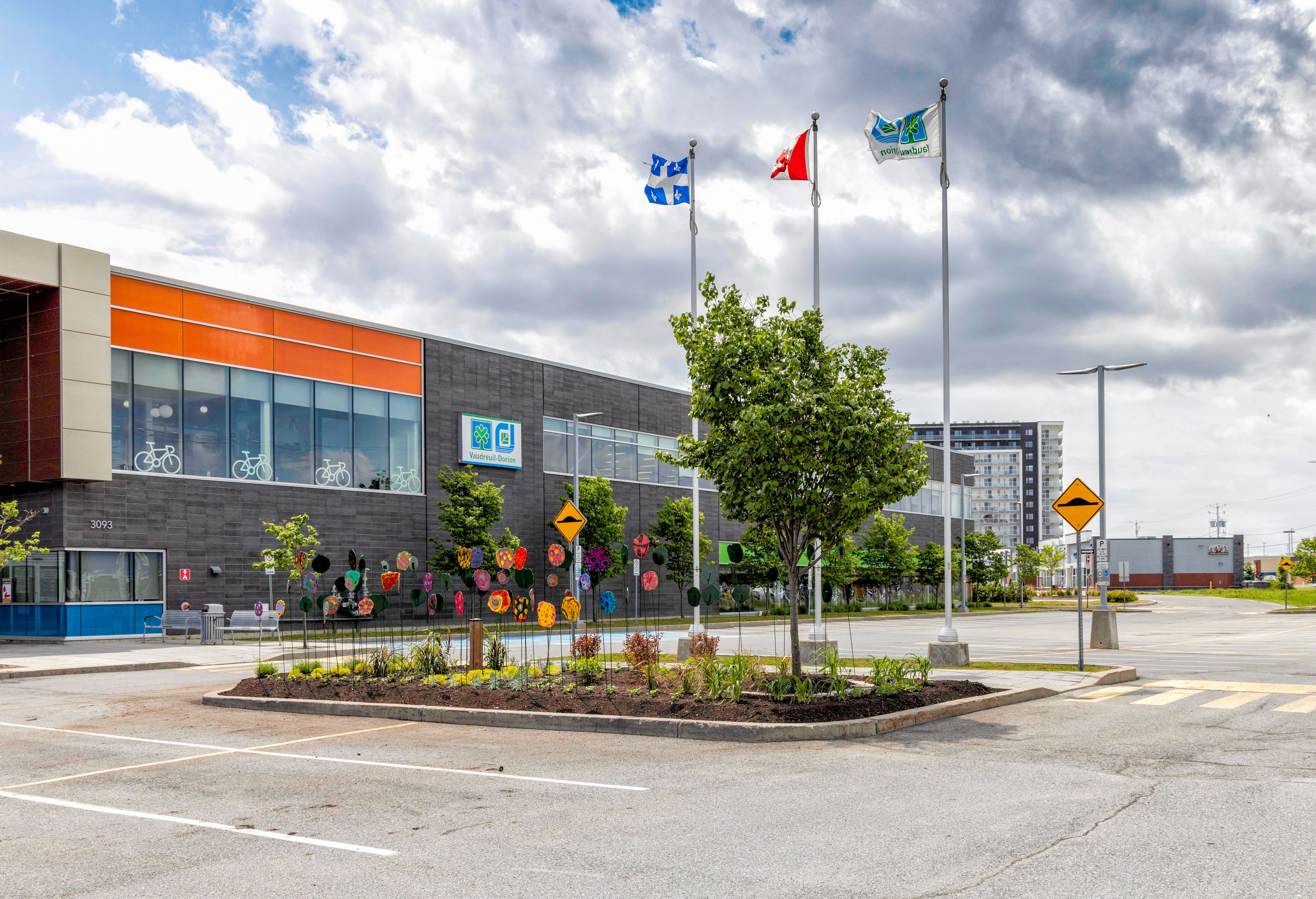 This work by artist Tina Struthers refers to the UCLG International Mexico City Prize won by the City of Vaudreuil-Dorion in 2016. It takes the form of seven sails of boats, representing the seven continents, symbols of movement, migration and new adventures. On the sails is replicated on a large scale a sampling of different traditional and ethnic fabrics to highlight and value our differences. These mosaics of fabrics were created during cultural mediation workshops with citizens of Vaudreuil-Dorion. 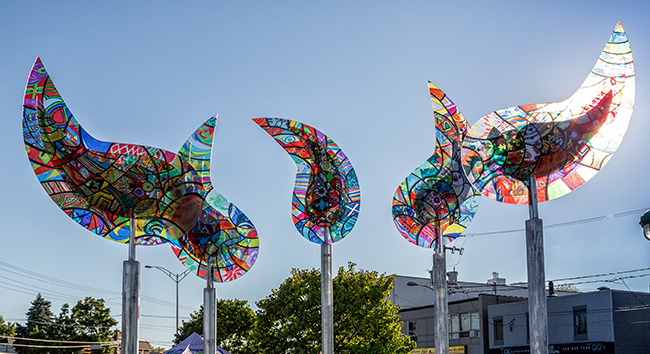 Urban furniture located at the Jardin des générations, at the corner of rue des Muguets and Laure-Gaudreault

This permanent urban art work in the form of furniture was produced by AUTAM members and artist Tina Struthers to mark the 25th anniversary of the organization's existence. The files and seats tell the story of the members of the last three decades, from an education point of view. The work is composed of photographs and texts in the form of collage.

Mural installed on the building serving as a place for the Cercle de fermières, rue des Loisirs

Mural on wood panels created by the members of the Cercle de fermières, the partners of the organization and the artist Céline Poirier.

Creation of sculptural artworks by artists Sonia Haberstich and Monica Brinkman in collaboration with citizens of diverse cultural communities. Structures represent caring, listening and discovering each other.

Works located in the pedestrian tunnels near Valois Street, in the Dorion area

Project in two phases, initiated by Monica Brinkman in 2016 with the collaboration of Zone de Graff (Comité Jeunesse La Presqu'Île), with the aim of giving new life to the pedestrian tunnels in the Dorion sector. In 2017, bubbles were created by various citizen groups and artists Céline Poirier, Lucie Bisson, Jean-Noël Bilodeau, John McRae, Roxane Bilodeau, Monica Brinkman, Deirdre Potash, Sonia Haberstich and Tina Struthers. Each of the bubbles has a meaning of its own. 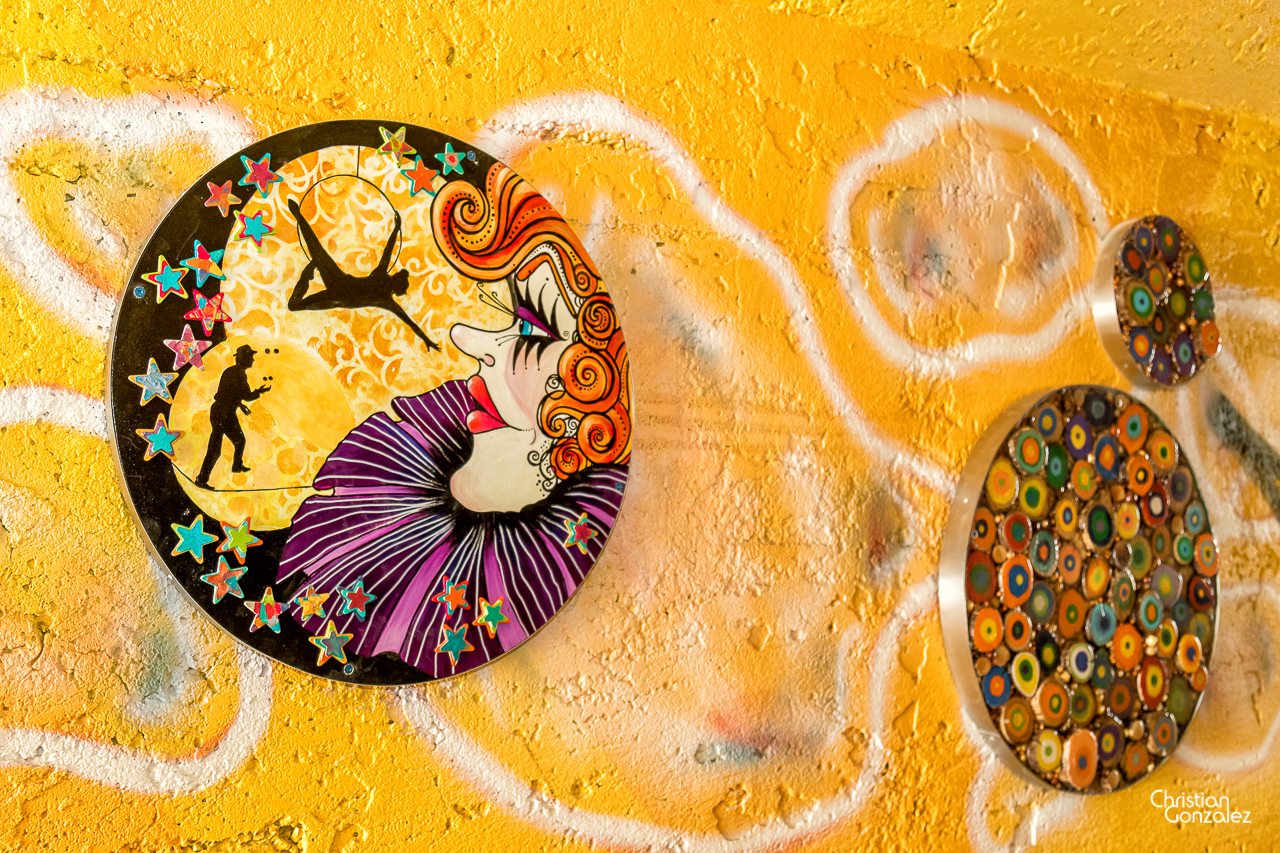 Artists Tina Struthers and Monica Brinkman created a work linking the Vaudreuil-Dorion of yesteryear to the urban city it is today. They wanted to use mosaic to turn a 1949 tractor into a symbol of the history of Vaudreuil-Dorion and its farmlands. The result? Some 500 small mosaic tiles adorn the tractor—a tribute to the participants in the cultural mediation initiatives and to memories of days gone by. 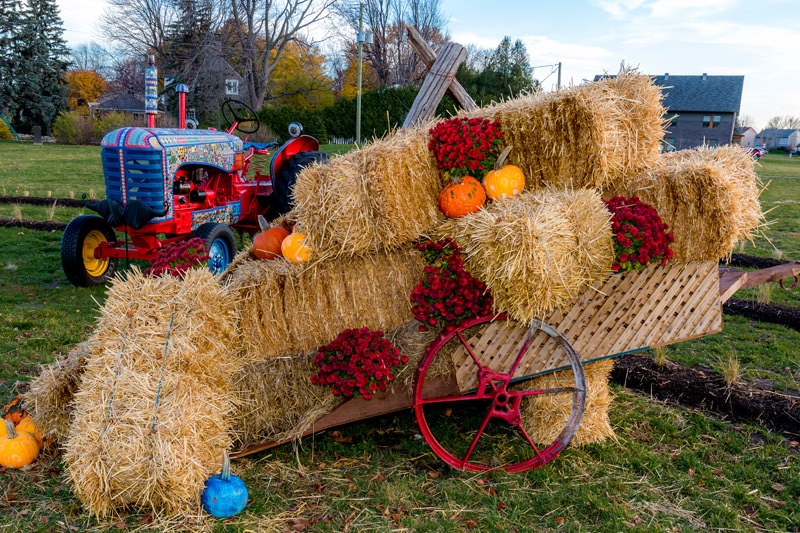 A mural painted on the Rue Valois overpass, at the corner of Avenue Saint-Charles

The "Nourrir ses rêves II" mural was proposed to encourage people to cooperate, dialogue and take a fresh look at our community. Madeleine Turgeon, with her unquenchable desire to democratize art by integrating it into our living environment, has proposed a series of art workshops with some 20 young people from Carrefour jeunesse-emploi to offer them an enriching experience while beautifying a much-neglected area of ​​the city.

The mural, composed of faces with big eyes representing the perspectives and dreams of these young people, evokes resilience in the face of difficulty. Their expressive eyes and smiles remind us that we must not abandon our dreams and that the future is here. 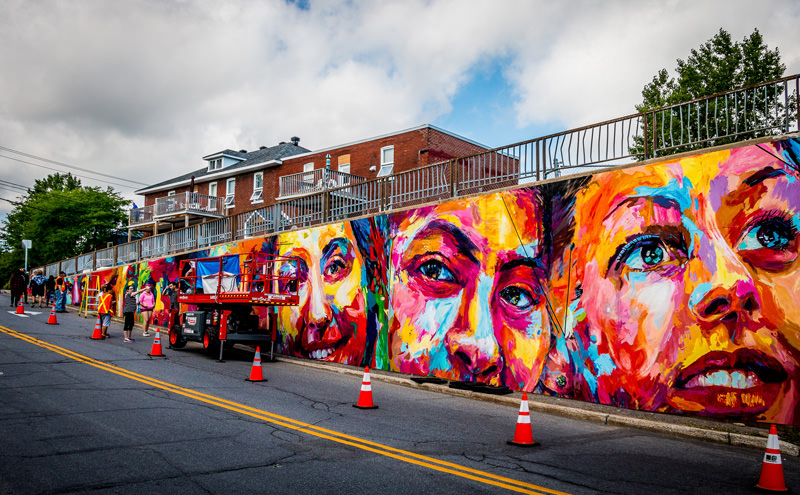